For most of us, opportunity has not been an issue.

We are told from a young age that we can be anything we want to be, and when we make it to college, we choose a major we are interested in, not a major that is available to us.

It is easy to forget that, about 60 years ago, Jim Crow laws in the south denied students the ability to pursue higher education based on the color of their skin.

The “separate but equal” doctrine — the notion that, so long as the opportunity, theoretically, existed for people with black skin it is appropriate to keep them away from people with white skin — was broken with the Brown V. Board of Education. Yet, that case was not singular. It was built on the cases of others. One such case was Bluford v. Canada. Lucile Bluford, a black journalist in Kansas City, fought for admission to the University of Missouri’s graduate school of journalism.

Bluford’s story is often overlooked and overshadowed by the Gains v. Canada case, from whence her case was born. Lloyd Gains, a black student pursuing a master’s degree in law, also fought for admission to the University of Missouri. After a long battle, the U.S. Supreme Court required the university to let Gains enroll. Gains mysteriously disappeared before he enrolled.

Bluford’s case was  important to the equal rights movement, and Bluford herself was a civil rights activist, fighting for desegregation and equality in the south. She left behind a legacy of inspired journalists, as well as a journalism program at Lincoln University. She gave black students the opportunity to have the education their citizenship guaranteed them. 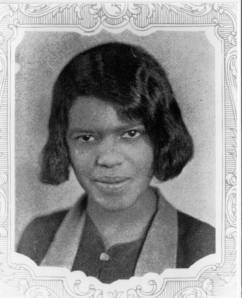 Lucile H. Bluford’s senior photo from University of Kansas in 1932.

Lucile Bluford was born in 1911 in Salisbury, N.C. (1). She got her start in journalism attending Lincoln High School in Kansas City, where her English teacher, Trussie Smothers, got her involved with the school newspaper and the class annual (2). She would later tell Donna Steward, the managing editor of the Call in 1989, that she liked knowing what was going on and what people were doing (3). It was part of what drew her to journalism.

Near the end of her high school career, Bluford would hang around the office of the Call, building relationships with employees such as Roy Wilkins, the news editor at the time (4).

After high school, Bluford went to the University of Kansas to study journalism, her tuition paid for by University of Missouri (5). The state legislature had adopted a plan to pay the tuition for black students to attend schools in Kansas, Iowa and Illinois if they wanted to enroll in a program not offered at black or integrated univerisities, such as Lincoln University in Kansas City, Bluford recalled in an oral history interview with Fern Ingersoll (6).[1]

She worked her way up through the ranks at the “Daily Kansan,” the University of Kansas’ newspaper, where she was the only black student on staff during her four years of undergraduate work, she said (7). While there, she would write about other students from Kansas City and send stories back to the Call (8). She graduated in 1932, and though she had a standing offer to work at the Call, Bluford went to work at the “Atlanta Daily World” for four months before returning to Kansas City and the “Kansas City American,” and eventually the Call, all in the same year (9). 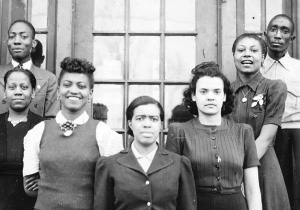 Lucile Bluford (center) worked at the Call for 70 years, beginning in the 1930s.

By 1939, she had several years of experience and was the current managing editor at the “Kansas City Call.” She had been working at the Call for seven years.

Miss Bluford and the University of Missouri

After the sudden, unexplained disappearance of Gains, Bluford submitted an application to the journalism school at the University of Missouri.

“I said, ‘Well, I believe I’ll apply for graduate work in journalism and I can find out what the University of Missouri would say [about a black student attempting to enroll].’ So that was really the basic reason that I did it, because I was just kind of curious about that the university would do, see,” Bluford said during an interview with Ingersoll (12).

University of Missouri lawyers would argue throughout Bluford’s suit that she was interested only in desegregation, not an education (13.). Though she could not admit it at the time, that was exactly the goal.

On paper, Bluford was quickly accepted to the University of Missouri’s journalism school. When she arrived to enroll, however, she was denied, as the university discovered she was black. In a letter to Bluford, University of Missouri registrar, S.W. Canada, told her, “If such fact had been known then you would have been immediately advised at time that you could not be admitted (14).”

Jim Crow laws in the south allowed segregation. The “separate by equal” doctrine mandated that, if similar educational opportunities were not available at existing black schools, they should be instituted. In Bluford’s situation, Lincoln University, did not have graduate classes in journalism and could not immediately institute a program. Though courts established a reasonable time for the program to be instituted, Bluford still pushed for admission to the University of Missouri.

A personal column titled “Nothing Will Happen When Negro Student Is Admitted to M.U.” by Bluford discussed her experience visiting the university and her interactions with students (15).

Newspaper clipping reporting on Bluford’s trial and the support she received from women from Stephens College.

“After spending two hours on the M.U. campus as a prospective student, I am thoroughly convinced that the students are not perturbed over a Negro’s entrance. I found the students no different from K.U. where I was a student for four years. Some are friendly, most are indifferent. I found no animosity,” Bluford wrote (16). Students and faculty expressed no opposition to integration, and the university extended its education to international students and out-of-state students, but refused access to citizens of its own state.

In a trial in February 1940, students from a white women’s college packed the courtroom and cheered for Bluford — so much so the judge ordered the courtroom cleared (18).

This newsclipping from 1944 shows that public opinion was quickly changing in support of integration.

When Lincoln University’s journalism school was finally open, there was a hearing to determine whether it was equal to the school at University of Missouri. Clearly, they were not, as one offered graduate work and the other undergraduate. Just as it looked as though Bluford would finally get in to the University of Missouri’s program, the program was closed on the grounds that too many students and faculty were joining the army with the advent of World War II (20). Bluford never fully believed the reasoning, and documents suggest perhaps the school was sneaking around the law. One  press release suggests that the university did cancel its classes to keep Bluford out. But in a letter to her lawyer, Charles Houston, Bluford said she heard that the university was still offering its graduate courses, but was not giving graduate credit for them in an effort to circumvent the law. (See documents below.) 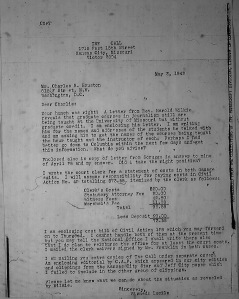 Lucile Bluford, in addition to her newspaper activities, participated in the civil rights movement, such as this march at the Lincoln Memorial in 1958.

Bluford, instead of continuing her battle with the University of Missouri, focused instead on using the “Kansas City Call” to write about segregation and to push for civil rights. She covered the Civil Rights Movement, lynchings in the south — though they were more rare during this period — and Martin Luther King, Jr.’s death. When she could, she would take a more active role, attending events, participating in committees and even testifying for more than three hours at a school desegregation suit (21).

In addition to Lincoln University’s journalism program and her work at the call, Bluford left behind other pieces of a legacy. She is listed under Missouri’s State Historical Society’s list of famous Missouri journalists, where she is recognized for fighting against and giving voice to social injustice (22). “Bluford stood her ground against violence, injustice, discrimination, segregation and poverty,” Robert Tabscott wrote in a 2010 article for the St. Louis Journalism Review.

Many honors were conferred upon her through her lifetime and career at the “Kansas City Call.” Ingersoll’s oral history project contains a three-page partial list of honors conferred on her, including curator’s award in journalism from Lincoln University in 1961 and a Missouri Honor Medal for Distinguished Service to Journalism in 1984 (23). In 1987, Kansas City named a public library branch after Bluford.

Fifty years after denying her enrollment, the University of Missouri conferred an honorary doctorate degree on Lucile Bluford.

Bluford also received several honorary degrees. Lincoln University awarded her an honorary doctorate degree in 1980, and in 1989, nearly 50 years to the month after she was first denied admission, the University of Missouri awarded her an honorary doctor of humanities degree. “You fought valiantly to integrate the University of Missouri as you were to fight later in Kansas City for integration of public places. We are embarrassed now that you lost the battle at this university, but today we are proud to add you to our list of degree holders — at long last,” the university wrote in its conferral. (24)

But her legacy lives on in the generations of journalists she inspired. Journalism students from the University of Missouri wrote in the first issue of “The Educator,” “Thank you for paving the way Miss Lucile Bluford.” (25)

Journalist Pam Johnson was also inspired by Bluford. In a piece she wrote for The Poynter Institute titled “The Unforgettable Miss Bluford,” Johnson recalls her encounters with Bluford while working at the “Kansas City Star.” Johnson said Bluford’s determination inspired her.

Senator Thomas Eagleton has gone down in history calling Bluford “the conscience of Kansas City and Missouri.” (26) “That role as the conscience is perhaps her greatest legacy,” Johnson wrote.

Robert Tabscott suggests “that Bluford’s career in American journalism is nearly a mirror image of that of the indomitable Ida Wells,” in her dedication to human rights and justice (27).

It is clear that Bluford’s legacy extends outside the walls of Lincoln University, serving as an inspiration to the next generation of journalists. In addition to her coverage, Bluford actively fought to allow everyone the opportunity to explore journalism, and to a greater degree, any subject. She refused to remain silent and let injustice pass her by. And that is, arguably, one of the main purposes of journalism.

Primary documents contained within came from a microfilm roll. Photos came from The State Historic Society of Missouri and the Kansas City Public Library (courtesy of the “Kansas City Call”).